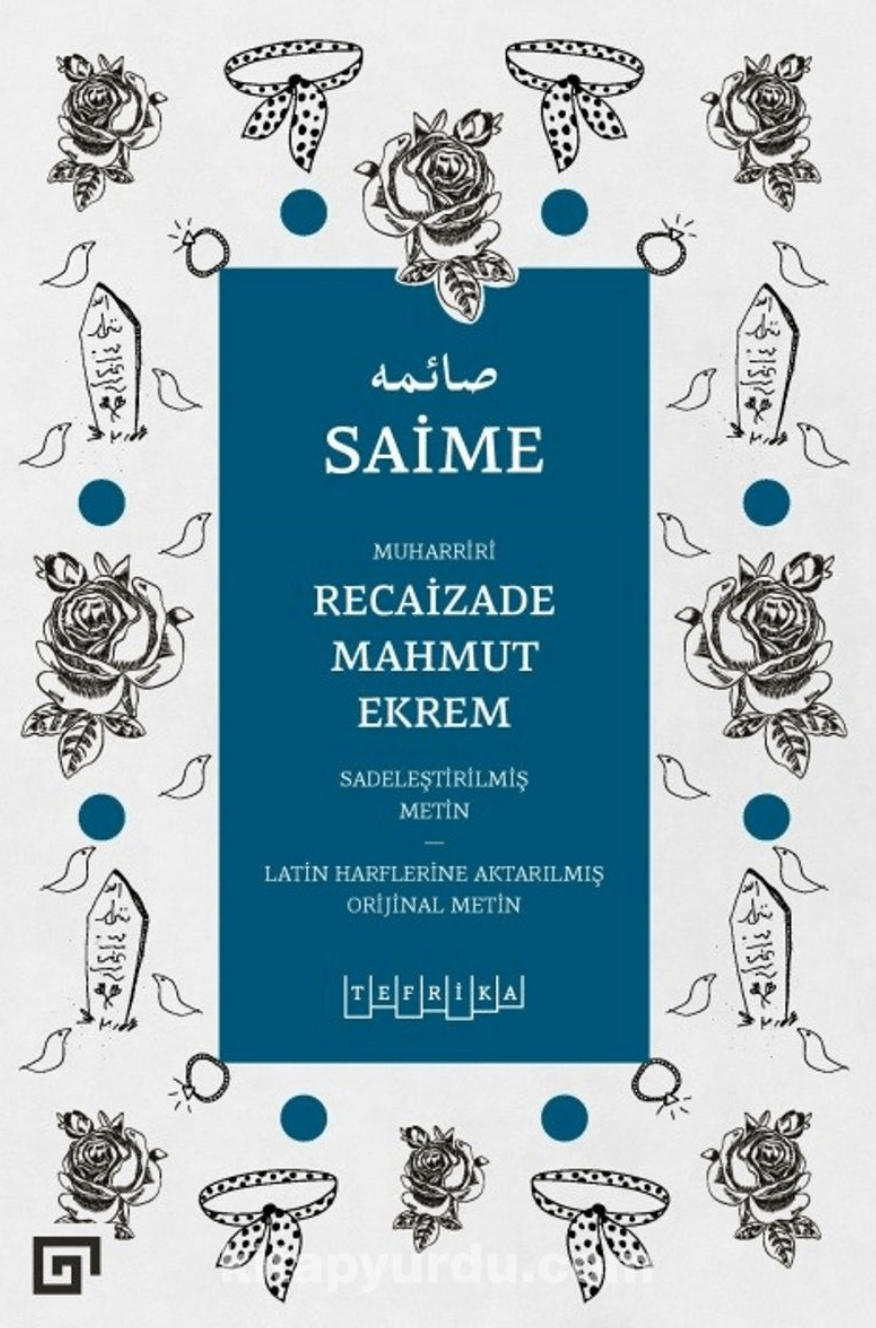 In 1928, neuropsychiatrist Fahreddin Kerim Gökay wrote that some “sapphist” women liked to wear ties in addition to short socks, men’s shoes, and a short haircut ([Gökay] 1928). The Turkish equivalent he used for sapphist was sevici, which was popular among his contemporaries, along with zürefâ and sahakâ, both of which originated in Arabic. Although it does not play a central role in his depiction, it is significant that the necktie, as cravat, is one of the accessories he counted to complete a masculine look.

Fifty-seven years before him, the Greek Ottoman writer Misailidis Efendi, in one of the earliest novels in the Empire, Tamaşa-yi Dünyâ, again evoked neckties that women were wearing. This time, the tie, made of ribbons, is not an accessory that complements a masculine look, but a sign of a secret female homoerotic subculture. “This is a unique society,” he said, “where they recognize each other by a ribbon they wear around their necks, while others are unaware. It’s such an outlandish lodge. God save my enemies from it!” (Misailidis 1986, 163)

Although we do not know whether Ottoman women actually wore neckties to communicate their erotic interests to each other, it is certain that this accessory was anything but a secret hanky code among women, since male literati, historians, and medical practitioners of the late nineteenth and early twentieth centuries spoke of it frequently. The necktie – usually white and embroidered – appeared sporadically in several texts, as these men drew on tropes and narratives, cultural repertoires that made female homoeroticism intelligible. The changing meanings attached to the necktie show how the frames of intelligibility shifted at the turn of the century as medical discourse began to compete with literary and historical narratives. The tie, which was written about exclusively by male authors, can also be used to trace various male anxieties that shaped the frames of intelligibility of female homoeroticism.

The necktie as the key to a homoerotic subculture

With the white necktie, the male intellectuals gave their readers – presumably male – a key to unlock and penetrate the mysteries of a female homoerotic subculture. In doing so, they projected onto women the anxieties that the burgeoning heteronormative ideal of monogamous companionate marriage triggered. The tie appears in a pivotal scene of the unfinished novel Sâime (1898), when the elderly and inattentive husband of one of the female characters, Fettan, passes away (Recaizade Mahmut Ekrem, 2018). Her female lover Mahbûbe, whom she had met in a hammam, ties a white scarf around her neck, similar to the one she was already wearing. Through this symbolic gesture, Fettan is unleashed from a heterosexual marriage and enters the world of zürefâ, the elegant women. Soon after, Fettan furnishes her house with expensive furniture and begins to offer delicacies at house parties where dizzying scents fill the air. The necktie represents a sartorial code, constitutive of a female homosocial subculture in which women’s homoerotic practices were embedded. In the world of zürefâ, characterized by female dancers (çengis), peddler women (bohçacıs) and female hammam masters, women are indulged in the worldly pleasures of dance and music, food and perfume, extravagant clothing and furniture.

The elegant, and quite feminine, subculture of zürefâ, which appeared sporadically in novellas, stories, plays, erotic, popular medical and history writings of the late nineteenth and early twentieth centuries, was not an invention of late Ottoman intellectuals. Ahmad al-Tifâshi, in his thirteenth-century book Nuzhat al-Albâb fimâ la Yujâd fi Kitâb (The Delight of Hearts or What You Will Not Find in Any Book), described women who participated in a similar female homoerotic subculture characterized by beautiful scents, above-average cleanliness, and excessive spending. Al-Tifâshi mentions that sahakâs, another word to indicate female homoeroticism, refer to themselves as zürefâ, the elegants, which is a “cultural category” that connects the community of women (Habib 2007, 70) (Malti-Douglas 2001, 134). Just like the late Ottoman Turkish intellectuals, Al-Tifâshi enjoys demonstrating his deep knowledge of the habits of this secret subculture (Malti-Douglas 2001, 134). The reappearance of zürefâ in nineteenth- and twentieth-century Ottoman texts provides a glimpse of the cross-cultural and cross-temporal circulation of images of female homoeroticism (Amer 2008). Since Al-Tifâshi was popular among Ottoman Turkish literati, we can readily assume that zürefâ were part of a cultural repertoire that made female homoerotic desires intelligible for the late Ottomans. Turn-of-the-century intellectuals drew on such figures to deal with the various male anxieties generated by the new heteronormative ideals of companionate marriage as well as compulsory heterosocialization as a prerequisite for a new modern society (Najmabadi 2005).

In the majority of the texts in question, two arguments stand out: the first is a socio-pathological one that concludes that female homoeroticism – and, despite some differences, male homoeroticism – is a consequence of degenerate social practices such as backward gender segregation and the forced marriage of young girls to older men. The other is the “seduction hypothesis.” According to this, women were easy prey for other women, who could seduce them into erotic relationships – as well as marriage-like committed relations – and once they set foot in this terrain, there was no easy way out. Since the seducing woman lures the other into this coveted and secluded world of female pleasures, women are able to cheat on their husbands right under the men’s noses without ever being noticed.

In the first half of the twentieth century, the figure of the feminine, elegant seductress wearing white embroidered muslin ribbons gradually gave way to a more masculine figure with short hair and a man’s necktie, as the inversion model that implied gender transitivity began to take hold. However, the discourse of social pathology and the seducer hypothesis proved resilient. As Eve Kosofsky Sedgwick influentially notes, frames or models that make desires, identifications, and practices intelligible do not function by superseding each other; they coexist by competing with, negating, destabilizing, and even supporting each other. Fahreddin Kerim, in his brief discussion of sapphism in another book on psychiatric illness, described women who love women as belonging to a subculture of hammam masters and female peddlers, and discussed their supposedly masculine appearance and occupations ([Gökay] 1928, 87-88). Meanwhile, the men’s tie also lent a studious, serious, and desexualized look to women, as shown by the example of some of the first female deputies of the Republic of Turkey who were pictured wearing ties in 1935. Thus, the transition of the necktie from a hanky code of a female homoerotic subculture to a masculine signifier was not immediate or straightforward; cross-cultural and cross-temporal references continued to inform its multiple and often contradictory meanings.

In the 1988 edition of Misailidis’ Temaşa, Anhegger and Günyol, who transliterated and edited the Karamanlidika text, added an endnote to the paragraph on the necktie, stating that “lesbians (sevicis)” had a long tradition of wearing white neckties to recognize each other, referring to a popular history book on the entertainment and popular culture of Ottoman Istanbul by Refik Ahmet Sevengil (Misailidis 1986, 164). With late twentieth-century Ottoman nostalgia, the white necktie was again a key, this time with the promise of unlocking the Empire’s long-lost world of imagined eroticism, which, whether lamented, celebrated, or censored, always seems puzzling to modern Turkish readers as well as to the imagined or actual gaze of the Occident (Ahıska 2010).

*An extended discussion of the majority of the texts in question was published in Turkish previously in Cinsel Normalliğin Kuruluşu. I would like to thank Katrin Klose, Saygın Sarbay, Giselle Bernard, Amy Visram and Kira Jürjens for their suggestions.

Ahıska, Meltem. 2010. Occidentalism in Turkey: Questions of Modernity and National Identity in Turkish Radio Broadcasting. New York and London: I. B. Tauris Publishers.

Ezgi Sarıtaş is currently a visiting scholar at the Centre for Transdisciplinary Gender Studies at Humboldt University and a fellow at the Forum Transregionale Studien, Berlin. Her current research titled ‘Entangled Histories of Sexual Modernity’ is supported by the Gerda Henkel Foundation. She works as a research assistant at Ankara University’s Department of Political Science. Her research interests focus on two topics: sexual modernity in the Ottoman Empire and the early Turkish Republic, and the feminist and women’s rights movements in modern Turkey.