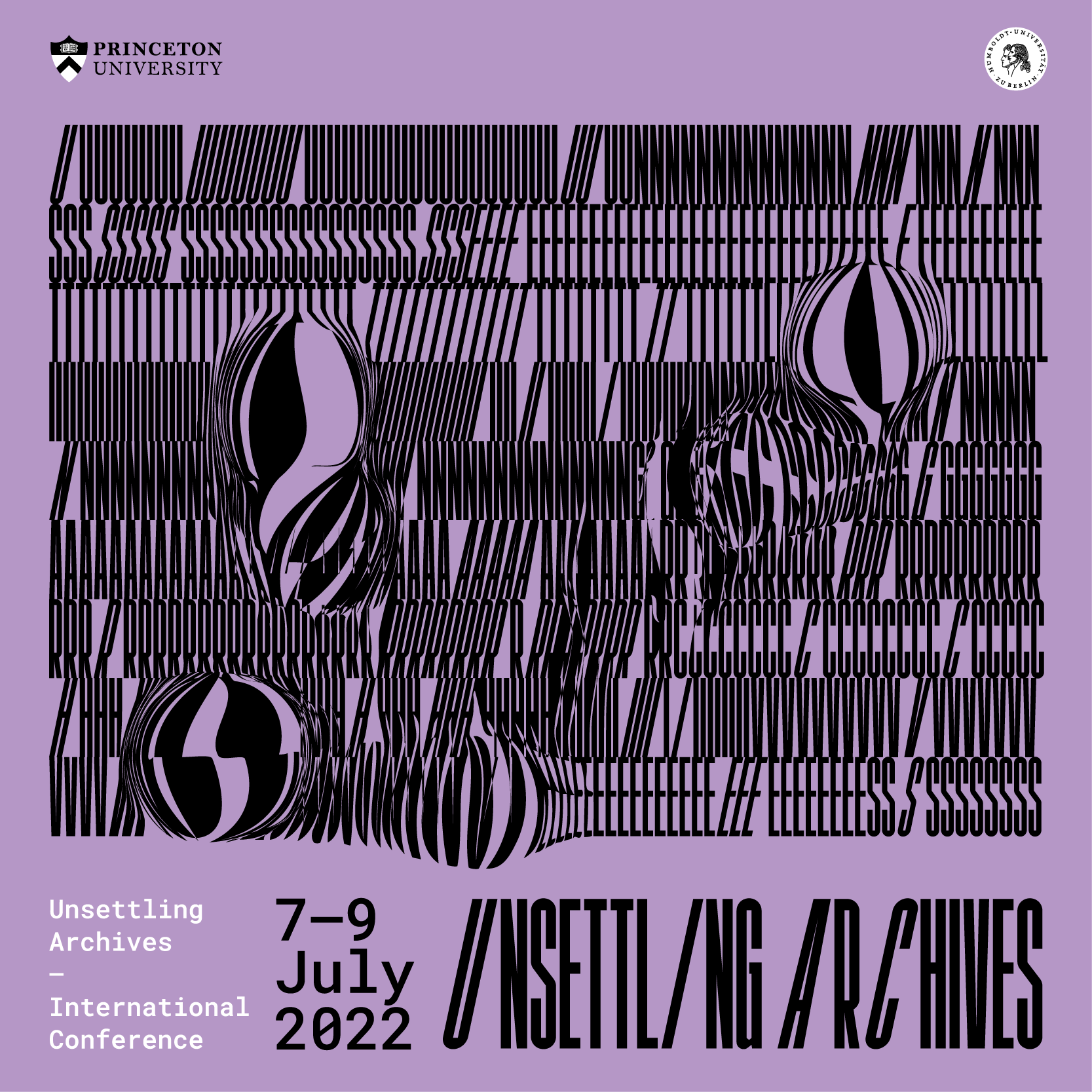 Why do gay people love ruins? In the archive of (queer) history, we encounter both literal and metaphorical ruins – as cruising areas, as places of undoing and failure, and as spaces of reconstruction. Speaking about ruins requires us to think about where we stand in relation to the past and how we access it. It requires us to think about the archive – and the question of why gay people love ruins was a surprisingly recurring one at the conference. Unsettling Archives, which took place in the Senatssaal at Humboldt-Universität zu Berlin from 7 to 9 July 2022, unravelled the archive in all its spatial and temporal complexity.

A hybrid event with about 70 participants, the conference focused on the relationship between narrative and material accounts of the body, the frictions that unsettle and confirm gendered and racialized certainties about archival knowledge production, and the archive as both the location of biopolitical regimes and the potential site of their subversion. It developed an understanding of the archive as an interplay between physical spaces, a principle of accretion, and as a lens to examine systems of knowledge and power. Contributors worked with material objects as well as narrative and socio-material constellations. Organized by Silvy Chakkalakal (HU), Elahe Haschemi Yekani (HU), Gabriele Jähnert (HU) and Wallace Best (Princeton), Unsettling Archives was part of the strategic partnership between Princeton and Humboldt-Universität that jointly examines the sexual politics and postcolonial entanglements any form of archiving is implicated with.

The archive is not a storehouse that always already and passively contains knowledge. From its moment of conception, the kind of knowledge the archive creates depends on the modes of archival collection and access. Examining the European HIV/AIDS archive, Agata Dziuban and Todd Sekuler investigated reasons why people chose not to be included in it. They highlighted the threat of potential repression as a direct result of being outed by the archive. These people’s absence from the archive forms an ambivalent silence, a gap that needs to be articulated to become visible. A similar concern came up at the final roundtable at the Schwules Museum Berlin (SMU) – Peter Rehberg, head of the archive and collections, pointed out that the SMU embodies a queer countermemory by preserving bequests by people who deliberately donated to a non-governmental body. According to Rehberg, the SMU’s status as a community venture safeguards who can access the archive, substantially reducing the risk of abuse for the material it collects and the people it concerns. At the same time, it enables alternative modes of collection, opening up knowledge that official archives cannot provide. Countermemory can also modify institutionalized archives: Pawel Leszkowicz presented his efforts to queer national collections in Poland, advocating the “critical museum” as a space that actively probes its own collections to address the silences in permanent displays and past exhibitions while simultaneously surfacing suppressed presences in the archive.

Archives of the Body

We cannot comfortably separate the notions of archive and the body, since the body is at least in part constituted through archival sedimentations. Biopolitics, for instance, shapes the body through regimes of classification such as racialisation or medicalising labels, along with the impact such classifications have on how a body gets to exist in the world. We can think of the body itself as a kind of archive, formed and marked as it is by the still-traceable impressions of past experiences. Several talks traced how archives categorize, shape, and even constitute bodies. Categorisation is central to the work archives do. Reading along the archival grain, as Ann Laura Stoler has put it, enables us to identify the structural gaps in the archive and articulate the work it does on a systemic level (2009). Colonial archives, by using the colonizer’s taxonomy, perform epistemic violence on the bodies they classify, impacting the restorative critical memory work we can do in retrospect.

In her talk on disability management in postcolonial India, Jiya Pandya analysed how western disability labels both provide ways to identify with a global community and are complicit with medicalising power structures that inhibit locally authentic ways of conceptualising disability. At the SMU, Thao Ho and Tarek Shukrallah reflected on the museum’s historical focus on gay white men, which gives rise to a collection that reflects the structures it emerged from – white at its core and BPOC only at the margins.

Access is a further point of tension. Whereas counterarchives like the SMU restrict access to shield a vulnerable community from outside repression, access restrictions in official archives can perpetuate the epistemic violence of colonial regimes. Kiel Ramos Suarez illustrated this with the example of the General Archive of the Indies in Seville. The institution requires citizens of former colonies to overcome significant administrative and financial hurdles to do research (e.g. visa application and costs).

The archive is in constant interaction with the body – the body that archives, the body it describes, and the body that accesses it. In his presentation, Jasper Verlinden brought up the term “datafication” to illustrate how bureaucracy as a technology of government enacts biopolitics via the archive. The physical archive attests to how biopolitical categories become reified, while the archive as an image for accumulated histories shows how bodies and spaces have arrived in their contemporary constellations. Madison Wolfert’s talk examined how 17th-century writings about Native American women anticipated and prepared regimes of “improvement” by rendering both the landscape and its inhabitants as pliable resources at the colonizer’s disposal. Alexis Ferguson’s case study focused on mid-19th century physiological texts that located sex in alleged unconscious associations between gendered behavioural patterns and inferred physical characteristics, defining a “preliminary cisness.”

The archive evidences the work performed to make and conceptualize normative bodies, harming any bodies that fall outside these normative classifications, as Catherine Clune-Taylor’s talk on intersex people in the US showed. She described how institutional categories of care often don’t even acknowledge their existence, contributing to “ways in which intersex lives are made unliveable through medico-bureaucratic demands.” The hetero- and cisnormative archive hence leaves particularly deep impressions on the bodies it does not account for – and, as a result, determines which bodies get to live in the first place.

If we understand an archive as a principle of collection, we can also think of it as an architecture of knowledge. Its “structural grammar” (Jack Halberstam 2018) permits an archival gaze straddling the gap between past and present. Archives constitute temporal regimes and temporalities that open certain avenues into the past while obscuring others.

Dennis Ohm’s critical reading of a memorial to New York’s gay waterfront read it as a constructed ruin that tries to make a nostalgic object permanent while participating in the gentrification that displaced it. Sina Holst described the archival architecture of the memorial site of Auschwitz-Birkenau, where curatorial interventions stabilize a viewpoint of the space as partially ruined, providing spatial and temporal orientation for the visitor. Holst argued that through the visitor’s actively engaging with the site in an associative assembly of historical knowledge and on-site objects, the observer rather than the site makes the archive. This further centers the body as the place of archival and counter-archival work.

In his ethnographic remarks on Berlin’s Sonnenallee, Imad Gebrayel employed the sun as a metaphorical source of power that determines the length and shape of a person’s shadow, defining their potential for action in particular spaces. Using Sara Ahmed’s conceptualisation of how bodies can extend into space, he formulated an image of how the past enables and inhibits potential, highlighting the importance of the archive for articulating futurities. The keynote by Tavia Nyong’o reflected on these futurities in the form of utopian archives. He questioned what we can retain from the queer past and why only certain objects remain available to us, highlighting the importance of fabulation as a utopian counterproject that fills the archival gaps of the queer imaginary. Nyong’o selected three queer intercessors as resonant, personal, and approachable artefacts from the archive. These intercessors, artist and historian Marcel Princess Christian, scholar José Esteban Munoz, and curator Marvin Taylor, all challenge(d) established ways of recording the past with a view to potentially utopian futures.

What, then, is the archive? At the final roundtable, Wallace Best, Tera Hunter, Catherine Clune-Taylor (all Princeton), Silvy Chakkalakal and Elahe Haschemi-Yekani (both HU) came back to this fundamental question. They raised the possibility that “the archive” has become an increasingly free-floating concept similar to how “text” was used in cultural studies and analysis predominantly in the 1990s: as a kind of multitool flexible enough to do work on any object of analysis. Instead of limiting the productive potential of the archive by providing a static definition, it might be more pertinent to ask why the archive lends itself to so many projects across academic and artistic disciplines. In the words of Jack Halberstam, we can perceive “a slow but perceptible declassification of knowledge, a movement away from the 19th-century project of ordering, typing, and cataloguing, and towards a 21st-century vision of multiplying, confusing, and unsorting” (2018).

From a scholarly vantage point, the archive is attractive because it gives access to potentially unsettling forms of knowledge. At the same time, it questions how we produce and relate to knowledge. As a collection of culturally relevant artefacts, the archive lends itself to transdisciplinary analysis: applying the archival logic of datafication prominent in the US at the turn of the 20th century for example allowed Jasper Verlinden to develop a new reading of Edith Eaton’s short story “The Smuggling of Tie-Co” (1900) that centers issues of how bodies are read in gendered and racialized patterns.  The archive can be thought of as a network of interdependencies that reflect and enact power relations, but that can simultaneously be used to challenge them. While operating at the level of discourse, the archive also forces us to think about the material and ethical implications of care practices, preservation, and classification. Unsettling Archives demonstrated how the archival lens can destabilize perceived knowledge and give rise to new forms of knowing in the process, confronting us with the palpable realities of accumulating systematic knowledge. The conference used the archive as a nexus to let papers from diverse fields talk to each other in productive ways. Not least, Unsettling Archives highlighted how the archive merges the untouchable with the untouchable, absence and abundance, silence and articulation.

Konstantin Helm is an MA English Literatures student at Humboldt-Universität zu Berlin. They are interested in queer histories, trans* and affect studies and have taught a research tutorial on the intersections of literature and identity. Currently, Konstantin is a student assistant in a research project on affect in online automedia. As a break from theory, they have written and published short fiction.