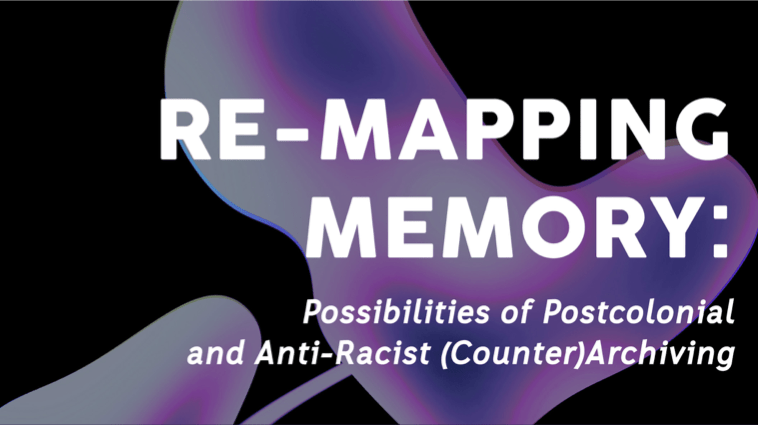 The digital conference, “Re-Mapping Memory: Possibilities of Postcolonial and Anti-Racist (Counter)Archiving” responded to the international protests against police violence triggered by the murder of George Floyd, which brought millions of people onto the streets in the United States, Germany, and across the globe. The collective action against racism, sexism, and transphobia prompted the organizers, Professor Wallace Best (Princeton, Religion and African American Studies), Professor Silvy Chakkalakal (HU, European Ethnology) and Professor Elahe Haschemi Yekani (HU, English and American Studies) to pose the following questions of memorial cultures and politics: how do the legacies of enslavement and colonialism manifest in our everyday lives, institutions, and research? What strategies can we develop to confront and counter these histories, whether through the renaming of streets, the creation of new commemorative sites, or the re-imagining of historical narratives?

These questions and many others were addressed by a range of speakers across the panels, at the roundtable discussion, and in the keynote talk by Professor Anjali Arondekar. The first panel, “Archival Affordances and Political Struggles” included talks by Anne Potjans (HU, American Studies), RL Goldberg (Princeton, English and Humanistic Study) and Tara Suri (Princeton, History). The speakers moved from the emotional politics of the #BlackLivesMatter movement (Potjans) to Clarissa Sligh’s black/trans archive (Goldberg) and finally, the politics of abortion in postcolonial India (Suri), in order to examine the entanglement of affect, racist violence, gender, and sexuality in distinct historical contexts.

The Body as Archive

The second panel, “The Body as Archive,” expanded the notion of the archive to consider human bodies as archives and probe the possibilities of re-imagining the embodiment of information.  Drawing on trauma theory, Sina Holst (HU, European Ethnology/Cultural Anthropology) proposed an understanding of the human body as existing in temporal multiplicity as a contribution to theories of memorials and memory cultures. Jiya Pandya (Princeton, History) turned to feminist crip theory to examine the eugenics logic of scientific archiving in the aftermath of the 1984 Bhopal Gas Leak in India, demonstrating the ways in which the treatment of women’s, children’s and fetus’s bodies as archives stripped them of their agency. Both speakers focused on the intersection of archival practices and temporal constructions not only to understand the historical limitations placed on embodiment, but also to suggest new ways of conceiving of the body.

The roundtable discussion, “Possibilities of Postcolonial and Anti-Racist (Counter)Archiving in the Present Moment” brought together scholars from a range of fields to address the central concerns of the conference: Natalie Bayer, director of the FHXB Friedrichshain-Kreuzberg Museum in Berlin; Silvy Chakkalakal, Junior Professor at the Institute of European Ethnology and the Center of Transdisciplinary Gender Studies at Humboldt-Universität; Elahe Haschemi Yekani, Professor at the Department of English and American Studies at Humboldt-Universität; and Anja Sunhyun Michaelsen, media studies scholar at the Institute for Cultural Inquiry (ICI) in Berlin. Professor Wallace Best moderated the discussion on curatorial practices and commemoration policies, the socio-political engagements of cultural anthropology, and challenges to existing archives as well as new methodologies of archiving.

In her keynote talk, “Archival Fragments: Gomantak Maratha Samaj” Associate Professor of Feminist Studies at the University of California, Santa Cruz, Anjali Arondekar presented the findings of her latest book, “Abundance: Sexuality, Historiography, Geopolitics.” Moving beyond narratives of loss, Arondekar instead proposed shifting attention to the radical abundance and futurity of histories and archives of sexuality. In doing so, abundance does not replace loss or paucity, but reveals itself as necessarily implicated in the histories of subaltern collectivities. At the same time, Arondekar argued, abundance unravels hegemonic discourses and enables their contestation. She presented two archival encounters: the surplus of the Gomantak Maratha Samaj archive in Panaji, Goa and a mother’s attempt to procure an Other Backward Caste (OBC) Certificate for her son. By highlighting the promises and failures of archival production – in the “presence without preservation” of the Samaj archive and the instability of the evidentiary form of the OBC certificate – Arondekar illuminated what she deemed the “consistent subaltern pragmatism” in response to the abundance of the archive.

Shortly after the digital conference in March, the Strategic Partnership continued its collaboration in the form of an undergraduate seminar at the Center for Transdisciplinary Gender Studies co-taught by Susanne Klimroth (HU) and Mari Jarris (Princeton, HU), “Emanzipation und Revolution – Kritische Perspektiven auf Gender und Sexualität um die Jahrhundertwende (1890-1930).” The seminar seeks to expand the archive of German-language texts on gender and sexuality at the turn of the century by introducing the work of lesser-known woman authors including Johanna Elberskirchen, Grete Meisel-Heß, Lu Märten, Franziska zu Reventlow, Marieluise Fleißer, and Gabriele Tergit and bringing these historical discourses into dialogue with the contemporary feminist and queer theory of Bini Adamczak, Angela Davis, and Silvia Federici. Roughly twenty-five students from Gender Studies and related fields participate in weekly discussions, preceded by individual written responses to the texts.

As the Strategic Partnership develops new projects and partnerships, it will continue to respond to the possibilities of international collaboration in various digital and in-person formats.

Mari Jarris is a Ph.D. candidate at Princeton University’s Department of Comparative Literature and Program in Gender and Sexuality Studies and Humboldt-Universität’s Institute of German Literature. She is writing her dissertation on utopianism and feminism in nineteenth- and twentieth-century German and Russian socialisms.

Susanne Klimroth is a doctoral student in the bi-national doctoral program „Das Wissen der Literatur“ at Humboldt-Universität Berlin. Her doctoral project focusses on the gender-political dimensions of repugnant bodies in Modern German Literature.