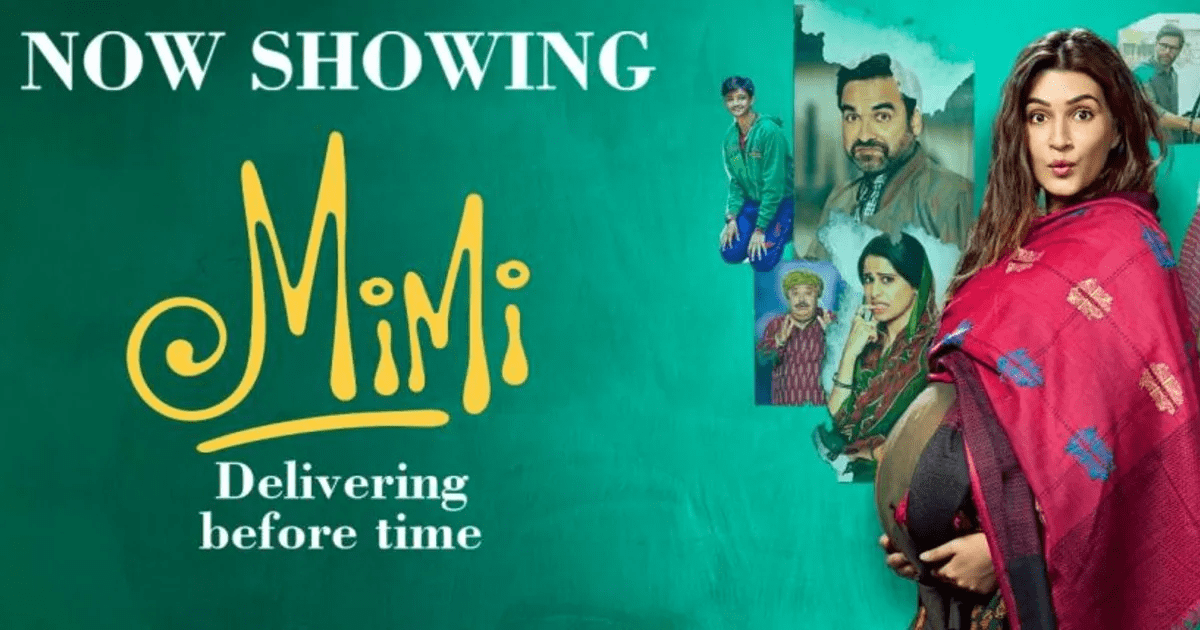 Commercial surrogacy was legally banned in India in 2016. Single persons as well as same-sex and unmarried couples from abroad had already been excluded from legal access to surrogacy even before that. The Hindi feature film Mimi (2021, dir. Laxman Utekar) is the second remake of a Marathi movie released under the title Mala Aai Vhhaychy! (“I want to be a mother,” dir. Samruoddhi Porey) in 2011. The change in the law may partly explain why in the 2021 remake, it is not a single woman from the United States who commissions the surrogacy, unlike in the original. Instead, an involuntarily childless married couple are conveniently able to contribute the necessary gametes themselves – sperms, egg cells – on site so that a fertilized egg can be transferred to Mimi’s uterus in a specialized clinic in Jaipur. Mimi had never planned on becoming a gestational mother but the experience goes on to change her life forever.

The term gestational mother was created to refer to the woman in question’s supposedly limited role and neatly defined share of the ‘split motherhood;’ that is, the carrying to term of the intended child. As many ethnographic studies and sensitive documentaries have clearly shown, it takes the gestational mother a lot of hard work – emotional and physical – to have and nurture a child in her womb, a child that she must never think of as ‘belonging’ to her but to another family. Besides the surrogate or gestational mother, there are two other ‘peripheral figures’ of this constellation, conceivable today for the creation of children with the aid of assisted reproductive technologies (ARTs): the sperm donor (unforgettably visualized in the figure of Vicky Arora in the hit film Vicky Donor, 2012) and the (still cinematically much underrepresented figure) of the egg donor.

Proponents of gestational surrogacy in India argue for the bodily autonomy of the gestational mother. They support the opportunity for the intended parents to end their unwanted childlessness and to gain access to the heteronormative family model through a (at least partly) genetically related child. The camp of proponents, however, is divided. Some are of the opinion that with strict legal regulation and good medical care, women should, in principle, have the option of being a gestational mother and that this work should be adequately remunerated. Others find it difficult to accept that a woman’s pregnancy and motherhood, which for a long time was barely regarded as ‘work,’ can be motivated by anything except altruism and should accordingly be a free gift to the ‘other’ mother.

The young, unmarried Mimi Rathore from Rajasthan is anything but an ‘altruistic surrogate.’ – the only form of surrogate officially allowed in India since the Surrogacy (Regulation) Bill of 2016 which was re-introduced in the Indian parliament and passed once again in August 2019 . She isn’t a married women who already has children, two additional requirements for surrogacy post-2016. Mimi works as a dancer in local Bollywood-inspired shows and dreams of a big film career in Mumbai, for which she needs seed capital. She is not a ‘close relative’ of the commissioning couple, John and Summer, who are neither Non-Resident Indians nor Indian citizens – two more reasons why all three of them would currently not be legally allowed to enter into such an arrangement in India. This may have been one reason why the film was set in 2013.

Although dedicated to ‘all mothers and motherhood,’ Mimi avoids addressing current debates and problems in India. Such issues stretch far beyond the question of the (non-)permissibility of surrogacy; rather they concern the question of what family is in today’s India and who has socially recognized access to this life model and who is excluded from it – including the possibility to choose whether to have children or not. Is family defined purely on the basis of the heterosexual married couple and (blood) relationship between parents and children? Or is it possible to extend existing family models and to include, for instance, alternative or self-chosen families whose members take on caring relationships over a longer period of time?

As in the previous versions of the film, the question of motherhood is also at the center of the Hindi remake, and the main character goes through a considerable maturation process, at the end of which the gestational mother has indeed become an ‘altruistic mother.’ Despite suspicions that the baby has Down’s syndrome, Mimi chooses to give birth to a child who is genetically unrelated to her and who has been rejected by the commissioning parents for not being the ‘perfect product’ they were expecting in return for their costly investment and extensive search for a physically fit surrogate. She develops into a loving mother to the little, blond, blue-eyed, and healthy Raj and is so absorbed in her newly found role that she relinquishes any ambitions for a film career or an independently organized life as a woman. Her altruism even goes so far as to want to give up the beloved son: When John and Summer appear after four years and pressure Mimi to hand over the child, she agrees to spare Raj the strain of a long legal process with an uncertain outcome.

A sole coincidence prevents this at the last second, sparing Mimi and her loved ones, who are also very attached to Raj: While visiting an orphanage, John and Summer discover a girl who they want to adopt and take with them to the USA. In the end, they finally abandon their fixation on genetically related offspring and learn to perceive parenthood as independent of it. The film credits contain a reference to the many children in orphanages in India who need parents and who intended parents should consider rather than focusing on the idea of ​​genetically related offspring with the help of assisted reproduction technologies and gestational mothers.

The latest Surrogacy (Regulation) Bill, of 2020, now allows ‘any willing woman’ to be an altruistic gestational mother. Here, the admonishing index finger can hardly be overlooked: Forget it, you underestimate what it means to become or be a mother – you won’t want to give away the child you’ve nurtured in your womb for nine months; handing it over will cause you pain, even if the baby is genetically unrelated to you. Mimi exhibits interesting approaches: thinking and staging family and living together ‘differently,’ namely as a well-functioning elective affinity, which enables a harmonious and fulfilling togetherness regardless of the religious affiliation, class or caste background of its members. Unfortunately, though, these almost fade into the background vis-à-vis the strong emphasis on a woman’s seemingly ‘natural’ desire and destiny to be a mother.

It was only in December 2021 that Netflix announced that it would lower the prices for streaming services in India to become more attractive to a non-elitist audience. The company also stated that its program for the country is to be ‘diversified.’ Perhaps this will also enable new productions that dare to tell more stories around the issues facing many in today’s context of rapidly changing family realities and constellations.

This text is based on the article first published at https://doingsociology.org/2022/01/05/becoming-an-altruistic-mother-mimi-now-streaming-on-netflix-and-jio-cinema-but-why-exactly-now-nadja-christina-schneider/

Nadja-Christina Schneider is currently professor of Gender and Media Studies for the South Asian Region (GAMS) at Humboldt University Berlin. Among others, she has worked and published on the visual representation of surrogacy in India and transcultural mediation of knowledge on assisted reproductive technologies.